In this week’s newsletter:

It’s disappointing that some events needed to be cancelled after we moved up alert levels last weekend. One such event was Wellington’s iconic McEvedy Shield, which is held each year between four boys’ high schools.

But so far this week things have been looking positive for a step down again on Sunday. Hopefully we’ll get a stretch at Level 1 over the harrier season, although I guess we’ll just have see what happens from week to week.

Entries are now open for the 5000m Champs on March 27. It’s just $5 to enter and you can do that here. There’s also a Facebook page with more details here The event is still going ahead despite the rescheduling of the National Track & Field Champs in Hastings to the same day.

Athletics New Zealand have announced a modified version of the NZ Track & Field Champs will still be happening. See below for details.

And Mark Te Punga is organising a long run on Sunday, 14 March, to help those training for the Christchurch Marathon. Options are 10k, 20k, or 30k. 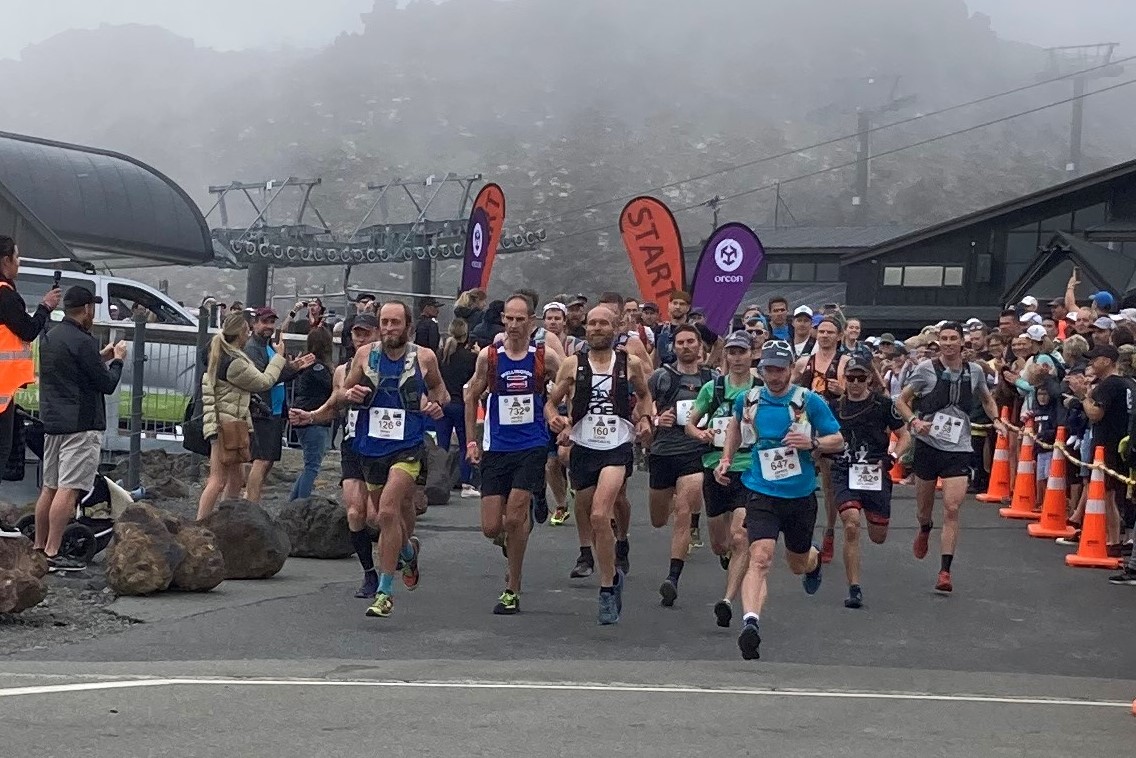 Wave 1A of The Goat starts. You can spot James Waite wearing a club singlet and Dan Clendon in the green top.

On Saturday at Mt. Ruapehu I took on the challenge of The Goat run, an extremely rugged trail run that begins at the Whakapapa skifield and finishes at the Turoa field. It’s a little under 20km and includes over 1,000m of ascent. The weather was misty in places and calm. The first kilometre is easily the fastest as you tear down the paved access road. From there, you spill onto the trail’s rugged scoria, and it’s very technical running the rest of the way. The scenery is stunning although most of the time I was looking down, trying to avoid twisting an ankle as we navigated rocks and ran through rivers. Scrambling down one bank I could hear my shorts rip as they snagged on a branch, and another runner would later say, “Oh yeah, you were the guy showing some ass”.

The trail continues along boardwalks and through beech forest at Lake Surprise, before veering straight up a rockface next to a waterfall and onto the final, painful ascent of “Mama’s Mile.” It attracts some tough runners — this year’s winner Sjors Coporaal (who has won at least seven previous times) trains by hunting pigs, while the guy who was second, Ryan Carr, rode his bike up from Christchurch to get to the start line. First woman was Sabrina Grogan in a speedy time of just under 2:30. WHAC’s Dan Clendon is a master of this type of running, and this year finished fifth overall and 2nd Over 40 (2:09). James Waite put in a powerful effort, finishing 21st overall and 8th M40 (2:32). I managed to make the podium as 2nd M50 (2:49). Michael Baughen (3:42) said he was having a good race until he had some issues with his leg seizing up. Overall it’s a great event, although definitely harder than I was expecting.

The New Zealand Masters Track and Field Championships were held over the weekend at Inglewood.

At the awards dinner, Quentin Rew was recognised as the 2020 NZ Masters Athletics Athlete of the Year Award in the Men’s Walk category.

Todd said it would be great to have seen more althletes from the club at the event, although next year’s event is being held in Wellington so there will be no excuses!

Here are the latest details on the 5000m Champs:

What? 5000m Championship with various grade categories (U16 through to Over 70).

How Much? The fee will be $5 which will contribute towards prizes for first-place finishers.

This is a great way to end the summer track season. Come along and have a go. There will be mixed gender fields, with a maximum of 30 runners per race. Prizes will be awarded to first place-getters in eight age-band categories. Please enter online. Entries close on Wed 24 March at 11:59 p.m.
When you enter you will need to provide an estimated 5k time (seed time) to help us determine which race you are best placed in. Format for the time is mm:ss.00 (sorry but you must include the .00)
Entry fee is just $5 – to be paid online via credit or debit card.

The 5000m track champs will be held late afternoon of Saturday 27 March. This is a great way to start the harrier season. All masters grades are catered for. You will be placed in a race according to your predicted time. An online entry portal will be available soon.

With Easter occupying the first weekend of April, official opening day is the following Saturday 10 April. There are four other major events being held around the country that day/weekend. This means that many members cannot be there for opening day. If you are in Wellington that day, please make the effort to attend the club on Saturday afternoon. We are organising various running activities on other days throughout the week between Easter and 11 April, a bit like university orientation week. Details will be in upcoming newsletters.

We are promoting the Donaldson Memorial on 24 April as the day for all ages and groups from the club to come together as one. The Donaldson is a fun short cross country relay, taking 6-9 minutes per lap and mixing all age groups in the same team. There will also be the traditional afternoon tea. Please put this date in your diary and attend.

The first of this harrier season’s inter-club races.

This year’s NZRR is on Saturday 2 October and it’s the Takahe to Akaroa, Christchurch. Please put this weekend in your diary. You may consider booking your air tickets now to take advantage of the current $49 Air NZ fares available.

Athletics New Zealand is pleased to confirm a modified version of the Jennian Homes New Zealand Track and Field Championships will take place over two days in Hawke’s Bay on Friday 26 and Saturday 27 March, featuring U-20 and senior athletes but unfortunately not able to include U-18 entrants.

Many logistical challenges needed to be taken into consideration, including limited accommodation in the region, flight availability and the need to limit numbers at the venue due to ongoing uncertainty around the Covid-19 alert levels and associated gathering restrictions.

Winner on handicap was Peter Corbett.

Any name corrections, email to Brendon brendon.flanagan@xtra.co.nz and Paul kiwiquaker@me.com.

Timings will stand per timekeeper recordings as they were ledigable.

2 min penalty was added to teams 2 & 4 final time for infringments.

Become a part of history by entering the 50th edition of the Bays Relay!

The Bays Relay is a fast and exciting road relay dating back to 1968. The relay consists of 5 laps varying between 3.85km and 4.80km, beginning at Island Bay and finishing at Evans Bay.

For the more social runners the relay provides a great opportunity to build connections with fellow team members and race around some of Wellington’s most picturesque bays. For the more competitive runners, the Bays Relay is the perfect chance to have a hit out on the road and practice some race tactics before the New Zealand Road Relay Championships.

Entries for this year’s Bays Relay must be made by August 9th.

Winner on handicap was Nick Perry.