In this week’s newsletter:

I hope everyone had a great break and got a chance to enjoy some rest and relaxation.

Well done to those junior athletes who competed in the Colgate Games last weekend and finished with some excellent results.

A reminder that this Sunday will mark the first Honest 10K run of 2022. It could be a good chance to check your fitness level after the summer break, or to get in a training run ahead of next month’s Round the Bays events.

There was sad news this week that Barry Everitt died. He was a central figure to the club, and John Barrance has written a lovely obituary about Barry which includes the details of his funeral service. 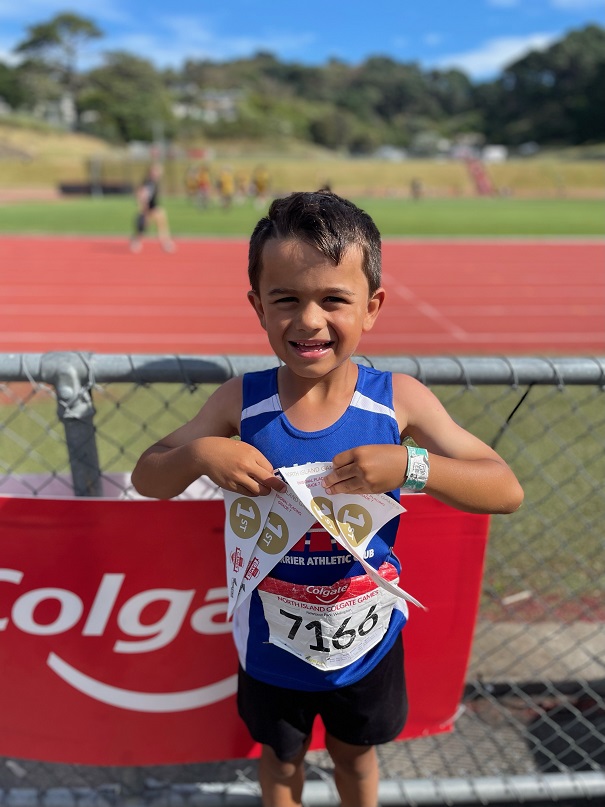 From Geoff Henry and others

The North Island Colgate Games were held at Newtown Park last weekend. (The South Island edition is next weekend in Invercargill.) The games cater for athletes from 7 to 14 years of age. The 7, 8 & 9 year olds do not progress to finals: pennants are awarded to the first 3 places in each heat.

There were between 25 and 60 competitors in each of the Boy’s and Girl’s events, so to actually get into a final was outstanding. Those who did included our medallists who qualified in several events, as also did Remy Boswell, Guyan Wilson, Guy Lester, Joseph Du Toit, Silas Campbell, Marius Filo-Smith, Charlie Kennach, Ashley Fitsemanu. We had several relay teams as well, and the teams which qualified for finals were our G10 (4 x 100m), our B12 (4 x 100m) and our Grade 12 Medley Relay Team.

Among the younger runners, Noah Masun and Mahe Boswell each won four events in their heats in the Grade 7 competition (see below) and Liciya Filo-Smith who, in the grade 9 division, placed 2nd in the 100m, 1st in the discus, 1st in the 60m and was part of the relay team that grabbed bronze in the 4x100m (alongside Eden Fagalilo, Sana Wilson and Mckenzy Paese).

This is not a comprehensive list so please feel free to email through any more results.

Athletics New Zealand has announced that Palmerston North and Timaru will be host venues for the 2023 Colgate Games. 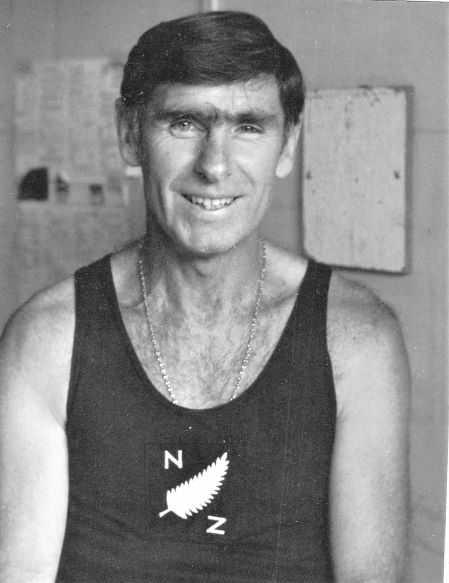 With sadness and fond memories we record the passing of Barry John Everitt on Monday morning 10th January, aged 84 years.

Barry was a man of great mana. His strength and grit shone through. His running opponents knew he was a great runner and fierce competitor. His friends knew him for his humour and loyalty.

Barry was a local lad, born not far from the clubrooms. In 1951 he joined Wellington Harriers as a 13 year old, in a grade that was then called Colts. He was encouraged to join by life member and one of the club’s stalwarts from its earlier years, Bill Donaldson, who was a neighbour of the Everitt family. Barry started winning club trophies that very first year and continued doing so for many decades to follow. He progressed to winning titles and setting records at Provincial and National level, over cross country, on the road, and on the track. He won his first national title as a Junior in 1956. He represented New Zealand at three World Cross Country Championships, the first in 1965 at Antwerp, Belgium. He ran with distinction as a Colt, a Junior, a Senior, and a Masters athlete. His longevity was legend. Barry completed for 50+ years in the Vosseler Shield, Dorne Cup, AW Cross Country Champs, and AW Road Champs. Barry’s record of achievements is unequalled in the Club’s 119 years.

As well as his athletic career, Barry devoted his energies to serving as a board member, to fund raising, to shifting the clubrooms from its original site at Evans Bay to where it is now on Mt Victoria. Barry was awarded life membership of the Club in 1979. He was club president for 18 years from 1995-2013. He has been club patron since then. Last year in April 2021 we celebrated Barry’s 70 years of club membership. Barry’s passing is the end of an era. He was role model to so many, a club legend, and the club’s central icon.

Barry has had his health issues and visited Wellington Hospital more than he wished. He passed away at peace in hospital. Barry is survived by his wife Mary, who is also a life member, and his son Barry. Our condolences and love go to them. There will be more of Barry’s life story in future newsletters.

Barry’s funeral service will be held at Harbour City Funeral Home Chapel, 300 Kapiti Road, Paraparaumu, on Wednesday 19th January at 2.00pm. The service will be open to vaccinated people only and you must show your vaccine pass upon arrival at the venue.

From Wairarapa Track and Field

Summer Series Event Number 1 is coming up on Sunday 16th January in Masterton.

Athletes must pre-enter through this link.

Please note that vaccine passes are required for most events, but for the 3000m Walk and the mens 800m we are running them as special events, in which if you don’t have a passport you will be able to compete, but under guidelines.

The 2022 New Zealand Marathon Championships for senior men and senior women will be incorporated into the Christchurch Marathon on Sunday 10 April.

Regarded as New Zealand’s fastest marathon, the flat course in the Garden City will offer a great opportunity for the top Kiwi marathoners to post a slick time.

All other age-groups including masters will have their national marathon championships incorporated into the 2022 Rotorua Marathon, which takes place on Saturday 7 May.

Track And Clubrooms Under Orange

All are reminded that the Newtown Park facility, as a Wellington City Council venue, requires all users – athletes, coaches, parents, and spectators – to use a covid vaccine pass. Entry is otherwise not permitted. The covid vaccine pass requirement applies to everyone who is aged 12 years and 3 months or older.

The vaccine pass requirements apply to our Junior Summer Track & Field club days on Saturday mornings, to all interclub meetings, and to Newtown Park training sessions whether group or individual. Athletics Wellington has mandated the covid vaccine pass as a requirement for all their interclub events this summer.

Currently, use of the WHAC Clubrooms does not require a vaccine pass. The board will discuss covid related requirements at the next board meeting on 20 December. If you would like your views conveyed to the board, please email one of the Board members. In the meantime, do the usual when it comes to clubroom use: stay home if feeling unwell; sign-in with the QR code; use the hand sanitiser provided; and hand-wipes to wipe down gym equipment after use.

The dates for the 2022 New Zealand Mile and 3000m Championships have been confirmed with Athletics NZ unveiling the exciting introduction of national men’s and women’s U20 mile titles for the first time.

In January, the first national senior mile championships took place for 52 years at a rocking Cooks Classic in Whanganui as Sam Tanner and Camille Buscomb took out the men’s and women’s senior titles, respectively.

The men’s race witnessed four sub-four-minute miles and next year the men’s and women’s senior mile championships return to Cooks Gardens, the spiritual home of the mile in New Zealand, on January 30 as part of the Cooks Classic.

Dancing Sands: WHAC members receive 20% off everything on the Dancing Sand’s website: dancingsands.com Just enter ‘whac20’ in the coupon field when checking out.